When Living the Dream Becomes a Nightmare

Very recently, as you may have seen from pictures we posted on Facebook and other Social Media, Ryan and I traveled to Greece with two of our very close friends. One of my other good friends posted a comment on one of my pictures that we were 'living the dream'. In many ways, I have to agree. We are so blessed to be living in London and to have the opportunity to travel and experience other cultures in a way that may not have been possible if we had stayed in the US. For example, I never would have guessed two years ago that I would have visited Russia or had been able to visit Greece during Easter. Next week, in fact, we will be travelling to Italy for a week, and in June I will be going to Zurich, Switzerland on the company dime to attend a conference.

Yes, one might say that I am living the dream.

I've been waiting a little while to write this blog post. I don't know why it's taken me so long to write, but I think it has to do with two things: 1) trying to preserve other people's perception of the 'innocence' and 'magic', if you will, of a place as beautiful and stunning as Greece and 2) trying to come to terms with what happened on Easter Sunday, 2014.

Let me start off by laying the scene for you: 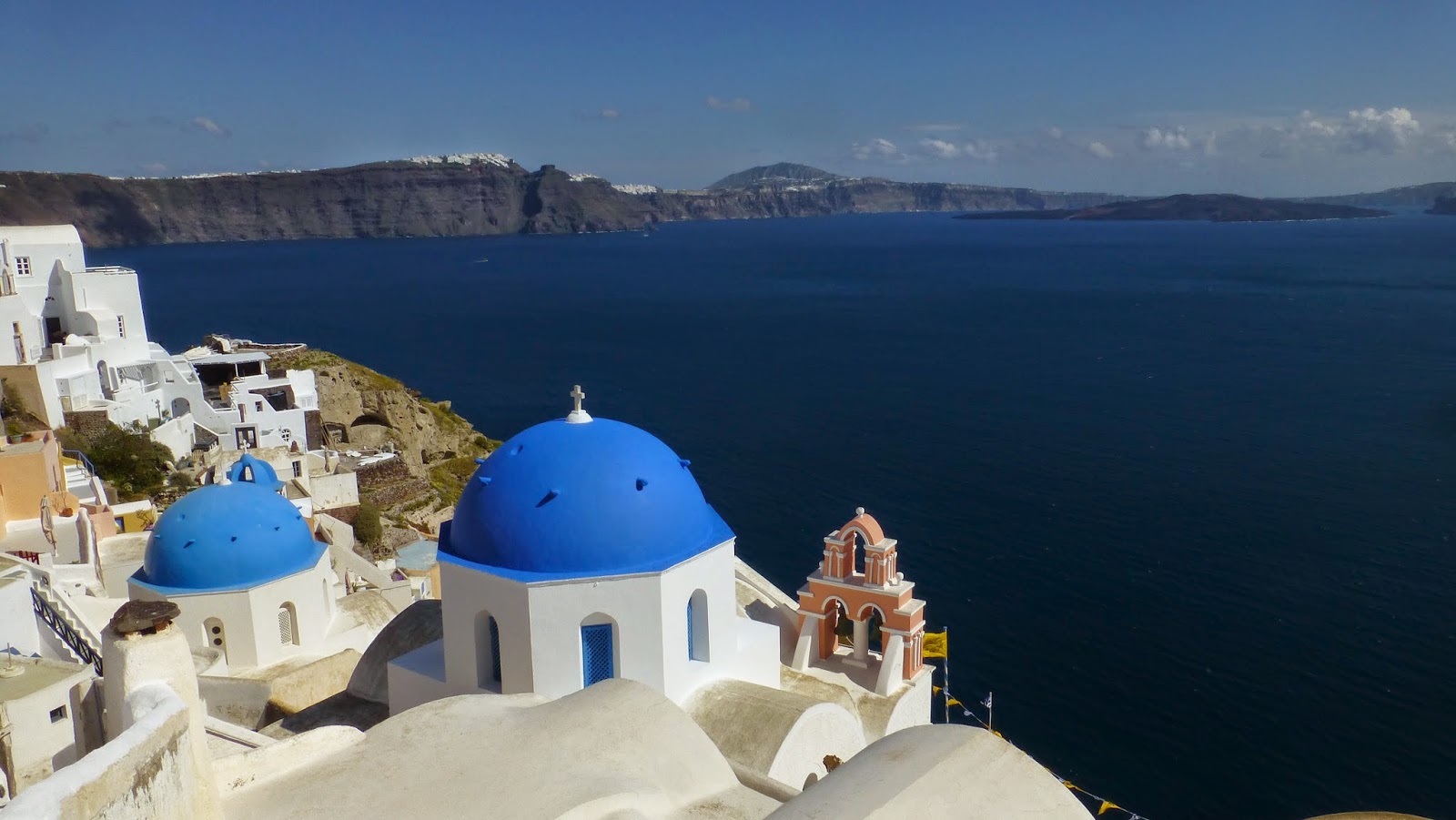 This, my friends, is Oia, Santorini. It is probably one of the most beautiful places I've ever been to, and I don't mean to brag, but that is saying something. You literally feel high on life when visiting this island. It's gorgeous, the town is extremely quaint and charming, and the food is out of this world fresh and delicious.

We were visiting during one of the most important religious holidays for Christians: Easter. This in itself was actually a bit of a coincidence, as the Greek Orthodox calendar does not always line up with the Western calendar. It was 'lucky' that 2014 happened to be one of the years where the two Easters fell on the same date, and we were able to see all the traditional festivities.

We were told by a friend of a friend that it would be really nice to walk down to the local church before midnight to see the festivities. We were told that the service is really neat: everyone brings candles and lights them during the service, and that it is a really beautiful thing to see all the people walking out of the church and back to their homes to break their fast and eat meat for the first time in weeks. Even looking at the Visit Greece website, it sounds pretty nice.

The one thing that we were not prepared for, however, were the fireworks. Yes, I know the tourism website mentions fireworks, and not only that, our hosts whose house we rented warned us that we might not want to get 'too close' to where the fireworks were going to be. The problem, I think, was twofold. First, we are from the US. When we hear 'fireworks' we think of a team of professionals lighting off fireworks from a remote location with proper safety protocols in place. Secondly, as I mentioned, we were 'high on life' and the beauty of the island. In other words, we simply forgot that we were in a second world country - right up until the point where we walked into the church courtyard and saw people throwing firecrackers onto the pavement only a few feet away from where the crowd was gathered for the church services. After seeing a few of these firecrackers go off shortly before midnight, we realized this was probably not the best place to be. It was quite windy that night, and one gust of wind could throw that explosive right into our path - so we started making our way back to the outer part of the small town.

That's when midnight struck. The noise was deafening. I've never been in a war zone, but that noise is what I would expect it to sound like. There were people shooting fireworks off their roofs into the air only feet above our heads. No matter where we looked they were everywhere. The only place to go was down some stairs and try to take shelter behind a small wall. We were huddled there for maybe 30-45 seconds before we saw him. A man coming down the steps in our direction with blood on his face and his pants literally blown off of him, hanging around his waist in shreds of fabric. He was obviously in shock, and it looked as though maybe he was blinded by the flashes; he was stumbling and squinting and holding his hands in front of his face, trying to tell if he could see them. Seconds later, a woman screamed out for her husband and for help. She was speaking English, and yelling out for her husband, whose name I will never forget. I only looked at her for a second, but her back looked to be badly burnt and she was pleading with anyone who could hear her for help.

I will probably never come to terms with what I did next, but I looked at her, and then I RAN. Where I was standing was not safe and I felt I was still in danger, so I ran as far down those steps as I could and never looked back. To this day, I am still trying to rationalize it to myself. It's true, I am no medical doctor; I could not have tended to her wounds. It's true, I did not know the Greece emergency number; I wouldn't have been able to call for an ambulance. It's true, I can't speak Greek; I wouldn't have been able to explain to someone else what had happened to get that woman some help. It's true, I was not the only person who heard her pleas and ran the other way. That doesn't make it right.

After waiting a few hours, we finally felt safe enough to walk back up the steps and back to our villa. We tried hard not to look at the blood on the ground, but it was impossible not to see it. We made it home, gave each other long hugs, and thanked God we didn't get hurt.

This experience has been an eye opener for us. Obviously we have never and would never intentionally go to a place that was dangerous, and fortunately our instincts kicked in quickly enough for us to get out of harm's way. In the future, however, I will certainly make it a point to know the number to call in an emergency situation when I travel.