While on our way to Moscow this past weekend, we noticed this article in the travel magazine. Apparently, even though Brits are quite close (comparatively) to a whole host of different countries, the average Brit has only been to seven countries outside of the U.K.

Since moving  to London, Ryan and I have traveled together to Sweden, Czech Republic, Croatia, France, Switzerland, Germany, Denmark, and Russia. We've also been to Wales and Scotland, but since they are part of the U.K., they can't count towards our tally. Thus, in less than a year, we've managed to overtake the average British citizen in terms of number of countries visited. And just to make sure we don't let them catch up, we already have trips to Spain, Greece and Italy planned before June.

It made me start wondering whether Americans were more or less traveled than Brits, so I started doing a bit of research. According to the article above, 2/3 of British people have traveled abroad at least once in the past 12 months. Comparing that to a study of Americans conducted in 2011, and you'll find that only about 8% of Americans traveled abroad that year. Obviously, this is most likely explained by the large distance between the US and other countries compared to the UK and other countries, not to mention the fact that if each State were its own country, we'd probably be much closer to the British figure.

Other interesting facts in the American study that stuck out to me were the average cost of taking an overseas trip. Per visitor, it appears in the 2011 study that the average cost for an American to go abroad is about $3000. Little wonder that those people taking trips have an average household income of over $100,000! However, I found stats that say if you are travelling from the UK, the average cost for a family of four to travel is 1,488 pounds, or around $600 per person. I believe it based on how cheap we've been able to fly around Europe. Just to put it in perspective, our tourist visa to get into Russia cost more than the flight did!

This article also summarizes the issues pretty well, and was written after a similar study of American travel habits came out in 2009. After reading the various statistics, I must admit, I feel amazingly blessed to have my travel map look as full as it does. It also reinforces the desire to see as many places as possible while it is all so close and so much more affordable! 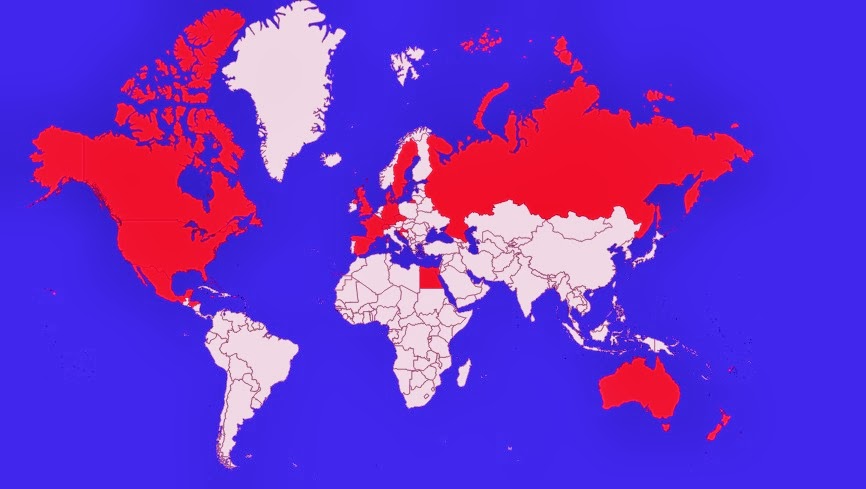