Oktoberfest: The Happiest Place On Earth 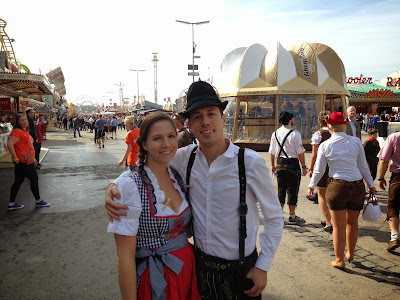 I know the marketing execs at Disney would like you to believe that the Magic Kingdom is the happiest place on Earth. And given that we were at Disneyland Paris last weekend (more on that in a later post), I think I can make an objective assessment about it. In the happiness department, it doesn't hold a candle to Oktoberfest in Munich. That, my friends, is the happiest place on Earth.

What's so great about Oktoberfest? For starters, think of it a bit like Thanksgiving. You gather to enjoy friends, family, and fellowship over food and drink at a long table, but servers take care of you. And all around you are hundreds of other tables of Oktoberfest revelers in a tent the size of a football field (of which there are a dozen).

Meanwhile, it's like a music festival with bands playing around the clock, and since it's situated in the middle of an amusement park, it also feels like a summer fair. Those who attend come from far and away, so you're guaranteed to meet not just Bavarians but people from cultures all over. Finally, you do all of this in traditional German costume - or at least you should, anyway.

More than anything, it feels like a giant party with everyone in a good mood. 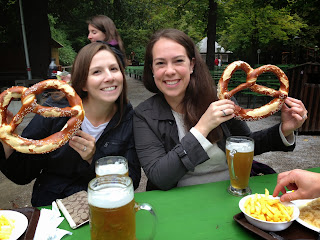 We flew into Munich the day before Oktoberfest began to meet up with our friends Sarah and Ted, who came all the way from Chicago! We toured Munich, checking out the Olympic facilities from 1972, outdoor parks, and plenty of shops with steins and cuckoo clocks. Eventually we landed at the original Hofbrauhaus.

On Saturday, we geared up in our lederhosen and dirndls and headed for Theresenwiese, the site for Oktoberfest. In many of the tents, getting a table can be tricky without a reservation, and we didn't have one. While we were waiting in line to get into the Lowenbrau tent, we noticed an opening at one of the tables outside in the bier garden. With sunshine and temps in the 60s, it was a perfect day to be outside.

The four of us quickly got to know our table acquaintances quite well: Deirdre and Dymphne - two Dutch women from Rotterdam, ostensibly in Munich for a dentists conference - and John and Dani - a younger English couple from Nottinghamshire. In fact after a few hours, onlookers might have presumed that we had all known each other for twenty years. Along with our amiable hostess Ingrid, we were blessed with exceptional company.

As the afternoon passed, Deirdre told us how she was dying to get inside the tent before she had to leave for Holland the next morning. While the rest of us held our table, she and Dymphne left to look for another way in, and minutes later we saw them pounding the glass to get our attention from inside! We followed their lead and found our way inside, and we all spent the rest of the evening carousing in the tent, meeting even more people from many different places.

The next day we met up with some more friends from Chicago - Mauro and Jen who live in Munich along with a few others who had joined them from the states. We spent the day in the Hofbrau and Hackerbrau tents, which were equally excellent. Later on - MUCH later - we all convened at Mauro and Jen's house for the Bears/Steelers game which started at 2:30am local time. Dead tired after that, we caught some sleep at the hotel before leaving for London the next day.

The first time you go to Oktoberfest is a bit like your first experience in Vegas: it feels equal parts fun and overwhelming since there's just so much stimulating activity going on. As we left and wondered to ourselves what we would do with our traditional German clothing, it struck us immediately that we should take advantage of the opportunity to go again while we're living in Europe.

So if you're interested in joining us for Oktoberfest 2014, we will most certainly be going!