I have always been a person that loves anything to do with Nursery Rhymes or Fairy Tales. One of my favorite stories growing up was Alice in Wonderland, so imagine my joy when I found out that our temporary apartment in London was located right next to the 'Walrus and the Carpenter' pub.

Walking around the streets of London makes me appreciate all the more the staying power of the Nursery Rhyme. For example, I think many of us have heard before that 'Ring around the Rosy' refers to the plague that wiped out 15% of London's population in 1665. And who could forget that 'London Bridge is falling down' yet again, due to the many reconstructions of the bridge over the years.

I think this is why I couldn't help but recite to myself 'Do you know the muffin man?' while walking on Drury lane located near the popular neighborhood of Covent Garden. Surprisingly, I did not see a single muffin shop! I seriously think there is a business opportunity there, even if you sell 'cupcake' type muffins, and not the 'English muffins' which is what the poem is actually referring to.

Interestingly, a rhyme that has grown somewhat nearer to my heart is the rhyme 'Pop goes the Weasel'. Apparently this tune started off as a dance without any lyrics, and a few nonsense lyrics started cropping up here and there. One of these verses is 'Up and down the city road, in and out the eagle, that's the way the money goes, pop goes the weasel'. City Road just happens to be a block away from where we live, and 'the eagle' is a pub located on that street. Now, I can't say that I'd be willing to pawn my coat (apparently this is one of the common theories as to what pop goes the weasel actually means) just to have a few pints, but I wouldn't put it past some of my British friends.

Keep Calm and Something Something 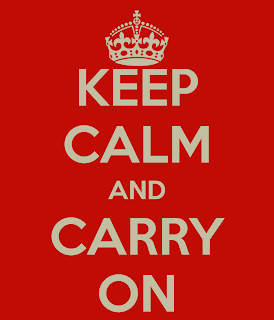 If you spend more than five seconds in London, you are bound to notice the omnipresence of the following five words: Keep Calm and Carry On.

The origin of the phrase and the associated red poster is from 1939, when the government's ministry of information distributed many leaflets with propaganda encouraging positive tones before the expected blitz. This phrase was one of them, along with two others which haven't exactly resurfaced to the same degree of fame: "Freedom Is In Peril: Defend It With All Your Might" and "Your Courage, Your Cheerfulness, Your Resolution Will Bring Us Victory" (thanks wikipedia).

The leaflets were never displayed publicly during the war, and apparently their distribution was quite limited. Which explains in part why their existence was all but forgotten for over sixty years.

In 2000, when a bookstore owner re-discovered a peculiar red Keep Calm and Carry On poster in a box of old books, he found it unique and interesting enough to hang it prominently in his store. It sparked immediate interest, which grew dramatically, and before long copies of it were available for sale all over the UK.

Britons are quite proud of their country's resolve in the war, and the uncovering of this kind of war relic fed into that pride and nostalgia.

Today in London, you can find the iconic font and layout just about everywhere. But I'd guess that the "Carry On" part only makes it into 20-30% of merchandise.

Once the poster reached its tipping point and gained fame, rampant commercialization took over and all but destroyed the essence of the message. Merchandisers have produced every conceivable spinoff of "Keep Calm and Something Something" to the point of absolute banality. 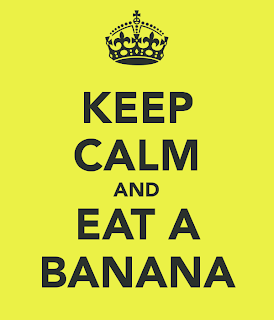 Here are actual examples of t-shirts I've seen people wear in the last several days:
Keep Calm and Gangnam Style
Keep Calm and Listen to Trance (and I thought, are these even compatible?)
Keep Calm and Enjoy Croatia... That's right, we were IN CROATIA and apparently these were being sold

My take is that if you're going to buy or create any merchandise that bastardizes the original phrase, it had better be funny or clever. And as you can see by the examples I've noted, not many fit the bill. This one pretty much sums it up: 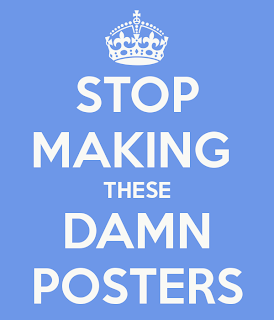 Otherwise if you want to get in on the craze, just stick with the original.
Tweet
Posted by Ryan Givens at 4:14 PM

Summer has finally arrived in London!

This past weekend was exactly what we've been longing for - 80 degrees and sunny, no intermittent rain, and a general feel of summer. When we first arrived in April and temperatures were reaching 60 degrees for the first time, we couldn't believe how packed all the outdoor cafes were. After all it wasn't THAT warm. And now that everyone's home is sweltering, Londoners are out even more.

It's just a shame that there isn't an infrastructure to handle it. Like many other cities in Northern Europe, homes just aren't equipped with central air conditioning because it rarely creeps above 72 degrees, and our place is no exception.

The Underground feels pretty disgusting, especially at rush hour. One day while riding the train Heidi noticed that her shoulder felt a little moist, only to realize that she had been wedged under someone else's armpit. Gross.

And having to wear suits to work everyday doesn't help either. My company's casual summer policy - ties optional - doesn't make much difference. After all last summer I was used to wearing a t-shirt and jeans to work every day. At least I'm able to walk to work and avoid the stifling feel of the tube.

On the weekends the recent warm-up has meant that there are even more markets and open-air concerts to enjoy, and this coming weekend looks to be just as promising. Anything that presents an excuse to get out and explore the city more is just fine by us.
Tweet
Posted by Ryan Givens at 3:10 PM