Chipotle in the UK - How does it measure up? 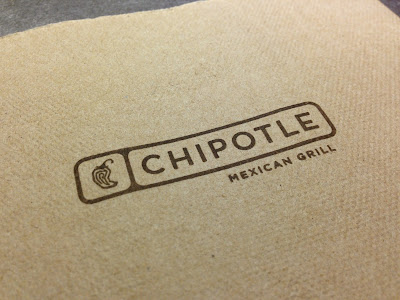 When we first arrived in London, we were pleasantly surprised to discover that we wouldn't have to go through Chipotle withdrawal. There are half a dozen Chipotle locations in the UK, all in London and one within a five minute walk of our new apartment. We were VERY eager to try it and see how it compared to the food we enjoyed in the US. So how did it stack up? Here is our full review:

Ryan: As far as I could tell, the tortilla was identical to the ones in the US. That meant the burrito could hold the same amount, thankfully not scaled down for European portion size. In fact, the server gave me quite a generous portion. Grade: A+
Heidi: I think the tortilla was a bit thicker than the ones in the US. That, or the girl didn't warm the tortilla enough so that it had that ever so slight stretchy goodness to it. However, it did hold just as much filling as the US tortillas. Grade: A

How Well Was My Burrito Wrapped?

Ryan: I've seen worse, but the server didn't put much effort into it. Had I not been more careful unwrapping, the whole thing might have degenerated into a sad pile on my basket. Hopefully this was just a localized or server-specific issue. Grade: C
Heidi: No problems here, my burrito was wrapped just fine. Grade: A 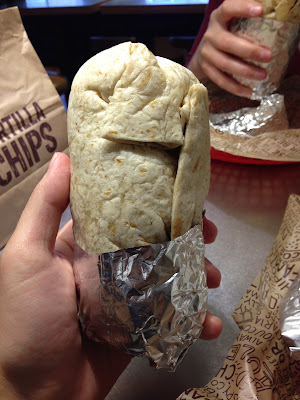 Ryan: As usual I chose white instead of brown. In my opinion the cilantro-lime rice is what separates Chipotle from the rest of the pack, but sadly the "lime" part of the equation was missing here. The rice was simply unremarkable.  Grade: B-
Heidi: As mentioned in my favorite Onion Article, it's all about the rice. Sadly, the texture of the rice here in the UK is a bit different, and it is definitely missing the cilantro-lime taste which makes Chipotle rice famous. Grade: C

Ryan: I went with the steak. It was slightly more pink than what I'm used to, but tasted just the same if not better. Only difference: bigger diced cube size. Grade: A+
Heidi: I had the chicken. It tasted the same as the chicken in the US, and I think it might be slightly better quality. For instance, sometimes the chicken in the US has that one piece that has just a bit of a gristle texture - none of that here. Grade: A+

Ryan: The black beans tasted roughly the same as in the US, however the scoop I received looked more like a soup. As I got toward the end of the burrito, every bite I took splattered bean juice all over my hands. At least the flavor was right.  Grade: B
Heidi: Upon walking into the Chipotle, I immediately noticed that the look of the fajita vegetables is quite a bit different than back home. For instance, the peppers are red, green, and yellow, and there is a definite lack of onions as compared to the US. In fact, I'm still not sure if there are any onions in it or not. However, the taste was much the same, and the peppers are cut into smaller pieces than they are in the US, making it a bit easier to eat. My grading has mostly to do with the lack of onion than anything else. Grade: A-

Ryan: Very good, although I asked for mild and received what would count as medium in the US. I'm going to choose not to let this ruin my day.  Grade: A
Heidi: I received the equivalent of mild in the US. The tomatoes are diced into slightly larger pieces here, but otherwise, tasted pretty similar. Grade: A

Ryan: According to Chipotle's website their cheese is a mix of jack and white-cheddar. I noticed a distinct difference here, and I think it was white-cheddar only. Not bad though, just different. Grade: A-
Heidi: I didn't order cheese, so no comment. Grade: N/A

Ryan: My gut feeling was that these were going to be under-salted, but they in fact were salted quite generously. Only problem? No hint of lime whatsoever. Grade: B
Heidi: If anything, I think the chips were slightly over-salted. Any yes, definitely were missing the lime goodness of the chips in the US. Grade: B

Ryan: Spot on. Couldn't be better. Grade: A+
Heidi: Considering that you can't get good guacamole here, (I once ordered a chicken sandwich that was supposed to have guac, and to my disappointment it was more like avocado mayonnaise) this was by far the best I've tasted in London. It had plenty of lime taste to make up for the fact that the chips lacked it, and I almost wished I had gotten it in my burrito to make up for the lack of lime in the rice. Grade: A+ 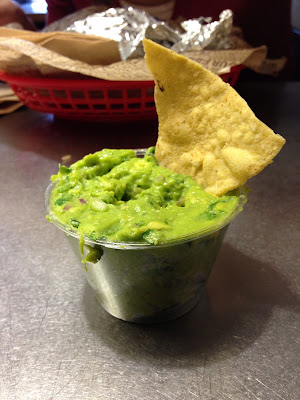 Ryan: The missing lime flavor in the chips is negated by the lime in the guac, and when paired together the chips & guac have just about the same taste as the delicious US equivalent. Grade: A+
Heidi: Agreed, together they tasted of home. Grade: A+

Ryan: We walked in around 1pm on a Saturday and there was no line whatsoever. That's a plus. The decor is the same, although they have trendy house music playing at decent volume. Outdoor seating was a plus as well. Grade: A
Heidi: Same sort of stainless steel tables and bar stool look of the Chipotles at home. Good music, and wasn't crowded. Grade: A 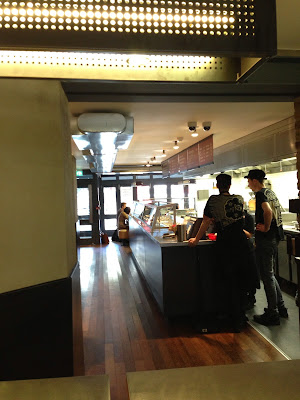 Ryan: No cerveza and no margaritas, but who orders those anyway? No fountain drinks either, but plenty of bottles & cans of fizzy drinks to choose from. Grade: A
Heidi: I think it's a London thing that there are no 'to go' cups. Rather, if you order a coke you get a can of coke. I think it's better for the environment and for your waistline. I was somewhat surprised that there was no booze considering London is obsessed with booze, but I wouldn't have ordered it anyway. Grade: A

How Does My Stomach Feel Six Hours Later?

Ryan: Well I'm not writhing in pain, so no complaints really. Grade: A-
Heidi: I am still quite full, and I didn't eat the last few bites of my burrito, same as how I don't in the US either. Grade: A

Ryan: There are a few minor faults with the ingredients, but when all the pieces come together the overall package is still pretty good, and definitely superior to the other burrito place we tried (called Tortilla). So it's not the same, and I can live with that. In the US I'd find myself having Chipotle about twice a month. I don't see myself maintaining that pace, but it's a relief to know that I won't have to go months on end without it. Overall Grade: B+
Heidi: I really wish I could go higher on my grading, but as I said before, it is all about the rice which is not the same quality as the delicious limey goodness which awaits me in the US. That said, I am grateful that as a total package, it comes pretty close, which is good enough for now.
Overall Grade: B+ 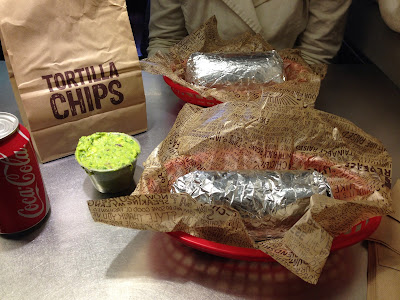